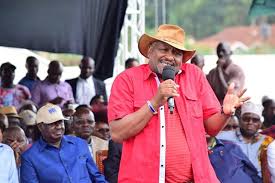 President Uhuru Kenyatta has appointed KANU Secretary-General as the Chairman of the Agriculture Development Corporation Board.

Hon. Nicholas. K. Salat is the Chairman of the Postal Corporation of Kenya’s Board of Directors from June 2019; the post he was supposed to hold till June 2022. He holds a Bachelor of Arts Degree (Political Science) from the University of Alberta.

He was also a Member of the National Assembly representing Bomet Constituency from 2002 to 2007. Hon. Salat is the current Secretary-General of the Kenya African National Union (KANU) the Independence and former ruling party in Kenya.

The Corporation plays varied roles in the development of agriculture in Kenya. As a provider of quality seed to the Kenyan farmer, it is the main seed maize grower in Kenya which is made possible through its large land area in Trans-Nzoia and Nakuru country.

Private schools to receive Ksh.7B in loan to salvage their operations

Raila to Mt. Kenya: Walk with me towards a more united, prosperous country