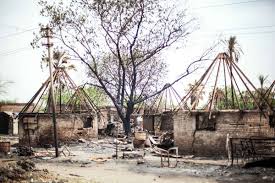 Two days of clashes between security forces and civilians in South Sudan have left at least 100 people dead and scores of women and children fleeing their homes.

The death toll could rise because several civilians wounded in the clashes are unable to access treatment due to the looting and destruction of health facilities.

The violence which has sent north-central Tonj into chaos began when a disagreement erupted between government forces who were enforcing a disarmament plan.

The disarmament of civilians is part of the most recent peace agreement signed between South Sudanese President Salva Kiir and rival Riek Machar, who was appointed vice president in February.

James Mabior Makuei, the councillor of Tonj East County in Warrap State, told journalists that violence began when civilians refused to hand over their guns to soldiers at a market in Tonj East on Sunday. The violence quickly spread to nearby villages, with armed civilians attacking an army base in the nearby town of Romich on Monday morning.

The UN peacekeeping mission is urging those involved in violence to lay down their weapons and to help restore calm for the sake of their communities.

The peacekeeping mission is also engaging political and community leaders and would support reconciliation and peace-building efforts to prevent further conflict.

TPLF leader: We are ready to negotiate with Ethiopian gov’t